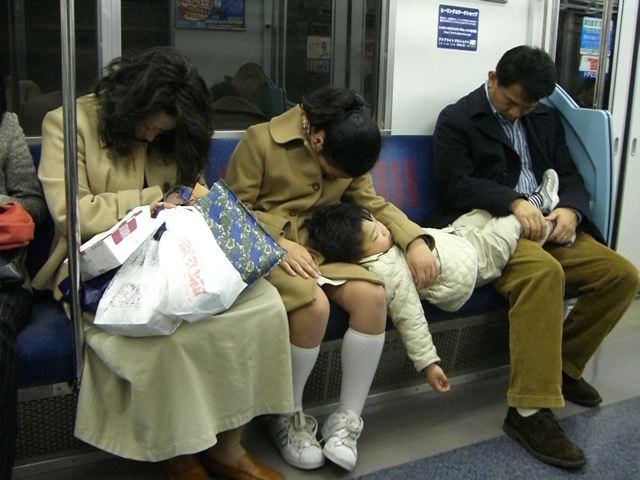 I was on the subway train tonight watching people sleep. There was a whole family crashed out in front of me, father, mother, son and daughter. An amazing sight. I had to photograph them. Around them were commuters who never batted an eye lid. I’d been out visiting English languages schools investigating a film about looking at bored Japanese housewives wanting to learn English.

I was sat thinking of a story told to me by a housewife who was explaining how house trained her husband wasn’t. she’d been ill and laid up in bed for a week and he was forced to help out. It was his first experience in the kitchen. He was making her an egg sandwich. When it arrived the toast was burnt and the egg frazzled. Her husband could not find the toaster so used the cooker fire to make the toast and did not realize that you need oil in the pan to fry an egg!

Another woman shook her head saying that she has to pour her husbands breakfast cereal for him each morning. The others sat around the table mumbling to themselves in agreement. “One day I make him continental breakfast the next Japanese breakfast with rice and soup…” another says that she was up at 5am to make her husband, who is a doctor, breakfast, she will have his evening ready meal when he returns at 11pm.

There is a great power balance that goes on between the housewives lifestyle and their salarymen husbands who are always blamed for not being around.

The women are accused of hanging around cafes with each other moaning about being bored… the husbands are accused of never being there, of always being tired.

In Japanese society the working day officialy finishes at 5.30, but no-one leaves until the boss leaves, the salarymen live in fear of what others salarymen may think. What is this all about? George Orwell’s 1984 Japan style…

Many single women in Japan also think that the housewives have it easy compared to their husbands who must work such long hours with so much traveling. It reminded me of my factory working days when I left school at 16 and worked in an engineering company. I remember discussing the very same subject with my work mates who were married with kids. They were tired, cold and covered in oil every day. All of them said given the choice they would swap their jobs to become house husbands. It would be interesting to measure their happiness levels with some of the Japanese. I’m sure they were relatively similar except that if unhappy the British wives could file for divorce.

Until recently divorce was not accepted here in Japan at all. Today it is becoming more popular, in fact very popular, although there is still a stigma attached to it.

After the English class finished one of the women tells me privately that none of the housewives are happy in their relationships. That marriage here is a duty; they are to look after the children and the house. “No-one said anything about happiness.” She told me many exist in marriages known here as ‘mask relationships’ which are sexless, loveless marriages. Often the husband has a mistress and the housewife knows but does not challenge him. I’d heard about housewives learning English with the sole intention of jumping in bed with the English teacher. A way of rebelling from their constrained life.

But life here in Japan is still very much dominated by the male, the man. I think women will have more rights in china before Japan. There is something so entrenched in the archaic way of thinking here that stops Japan moving forward and joining the modern world in its ‘way of thinking’.

Japan is ‘technologically’ the first world, but ‘mentally’ it is a third world nation. The years after the Second World War saw it race ahead and grow but with it came its feudal past still so evident in day to day Japanese life.

But things are changing slowly. Divorce is becoming more accepted here freeing women up from unhappy marriages. It is common amongst couples once their last child has finished university and amongst childless couples. It is also very popular for retired couples who never see their husbands for 30 years of marriage then they retire and stick to them like ‘wet leaves’. Retired housewives with ‘wet leaves’ wait for their husband’s pension to arrive then file for divorce. The husband is often shocked and spends the rest of his life wondering why his wife divorced him.

As the train pulls into my station I wonder about the family sat in front of me. They are still asleep. The woman sits on her own asleep, her head slumped ungraciously forward with the daughter on her knee and the father slumped with his son’s head on his knee. At first I thought they were Chinese or Korean immigrants but I was assured by a friend that they are Japanese; a great image of modern Japan.

In a funny way they all look equal in sleep.

The same friend assured me that they will wake automatically at their station, it could be one or two more hours yet but they will wake up. The Japanese always know when it is their stop.