I was warned that after spending a month in Japan, I would feel like a goldfish in a bowl and need to come up for air. It’s beginning to feel like that time of the month and I made an opportunity to escape.

I had a screening of Liberace in New York and I needed time to reflect on this film and whether or not to make a film at all in Japan.

I’m still asking myself is this the place i wanna be? sometimes it hurts real bad but then there are good times, mostly in the evening. God damn it, I keep meaning to give up drinking. I woke again at 3pm, went to bed at 5am this morning, it was only Sunday night. What happened to my catholic upbringing?

Anyway New York was the chance to take me away. I met with someone I’d never met before, (a friend of a friend) and made a very close friend by the end of my 3 days in New York. Me and Murat were like Turkish brothers, I appreciated his hospitality a lot, but by the end of the 3 days he said he’d partied enough for the year, and I was only just beginning, like a goldfish that had jumped from the bowl.

The screenings went well (as always in New York). I love New Yorkers. I wanted to make the decision to leave Japan and never return… but god damn it, I was missing the place! and more-so the food, New York used to be a food paradise but it now seemed awful when compared to Japan. Even for me as a vegetarian, this place (Japan) really is the food capital of the world. They make better French food then the French, better bread, pastry, coffee, ice cream, cakes..

Oh god my weight, I never took up karate, it felt too much of a cliché, and I was scared of being bruised at my delicate age. So i intended to go to the gym, I even got a map of the nearest park to jog, but instead I’m waking late watching my belly grow bigger on great food and no exercise. 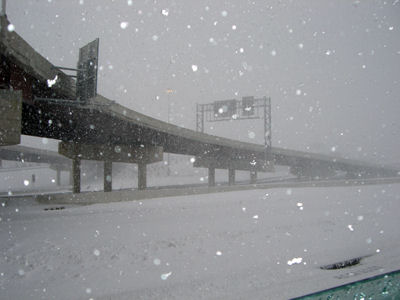 So I was kind of excited to be returning to Japan, then it started to snow in New York. Oh my god, it snowed. I took a cab to the airport but we lost the airport! nowhere to be seen. It was New York’s 2nd heaviest snow storm. 2 feet of snow, we were guided by a passing car to the airport finally. The flight was delayed 10 hours until the evening. Fortunately I’d upgraded with air miles and had a business class seat, so I was in the lounge. I watched the machines hard at work removing the snow on the runway, but just as they moved it more snow would come. It seemed never ending.

Then half an hour before we were due to fly the flight was canceled. We were shipped to a terrible hotel, had a terrible meal, terrible breakfast and ferried back to the airport the next day where I found I’d been downgraded to economy class because the flight was full – but given 3 seats to myself to sleep on, and access to the drinks bar up front. Some comfort.

I arrived back in Japan more exhausted then when I left, my relaxing weekend ended with more stress than a month in Japan. Now I’m sat here feeling like leaving but knowing I’m staying still looking for something to relate to, something to call my film.